“We are now the world leader, but we didn’t get here by accident. 15 years ago, our universities, government and industry came together and have continuously invested in this research over the last 15 years”

Alister Henskens Minister for Science, Innovation and Technology toured the world leading research facilities at ANFF-NSW@UNSW and ANFF-NSW@USYD, as part of his official visits to quantum computing research groups at UNSW and the University of Sydney, including the CQC2T and Sydney Nano.   He was also joined by the NSW Chief Scientist & Engineer, Professor Hugh Durrant-Whyte.

The Minister was very impressed with ANFF-NSW’s capabilities that underpin Australia’s leadership in research and development in the Quantum Economy, which was made possible by long-term strategic investment in ANFF-NSW and other labs at UNSW and the University of Sydney.  The significant potential impact on the Australian economy was emphasized with Minister Henskens noting that “This research that’s being conducted here and elsewhere in NSW is driving the industries of our future and the jobs of the future”.

ANFF CEO Dr Jane Fitzpatrick welcomed the Minister’s support and recognition of the high impact research enabled by ANFF-NSW: “Amazing to see the incredible work done at our NSW Node, which supports innovation across the economy and especially in Quantum Technologies, recognized and supported by the Minister.”

Minister Henskens comments and video footage of his tour were posted on the Minister’s twitter account, available on the links below. 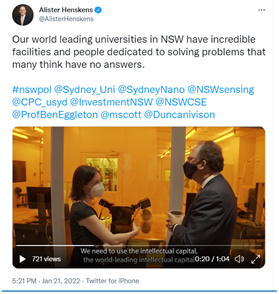 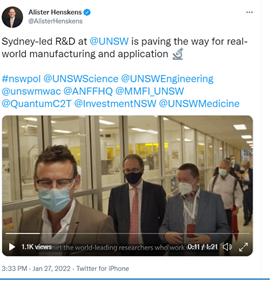 Link to the story on our ANFF national page